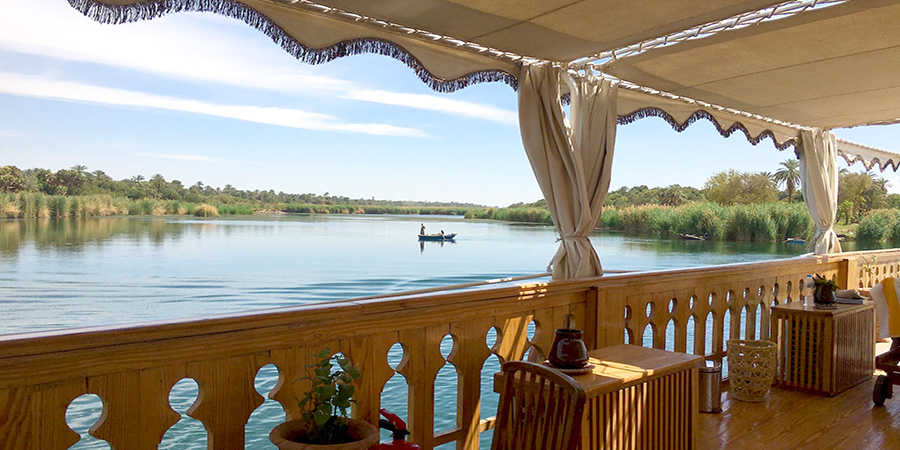 Dahabiya Nile Cruise  what Abd el-Latif el-Baghdadi described in the 1200s was a Dahabiya , which was originally used on the Nile for Caliphs , who decorated them with gold, also the boats of the king & the nobles of ancient Egypt were painted gold ( thus the name, which in Arabic means “golden boat''

The Dahabiya was a pleasure craft. It came in a variety of sizes & was not only used on the Nile, but on the small lakes.

Eventually it became one of the most popular boats in Egypt. Mamluk families rented Dahabiya to enjoy a pleasant afternoon on the water. When Napoleon was in Egypt he used one of these crafts which he called “L’Italie”.

When the age of the Nile tourist cruise began around 1830, tours were made by Dahabiya. Thousands of these boats lined the waterfront at Bulaq, as Amelia Edwards's reports;

Amelia Edwards mentioned that in her book “A thousand Miles up the Nile”, she had to choose a boat among 200 to 300 Dahabiyas which were offered for rent in the harbor of Bulack.

These boats were the preferred method of transportation among tourists & upper class Egyptians.

A few Dahabiya nowadays can still be found moored along the Nile in Cairo & south of Egypt.

When you travel along the Nile river, either on modern floating hotels or by other transport, you feel as if they have stepped back in time. Watching farming & other activities conducted in the same way they were thousands of years ago. Donkey carts & mud brick houses dot the landscape. It is a unique experience ….

Today Nile Cruises have evolved into floating hotels. Many of these boats are elegant as their common ancestor Dahabiya