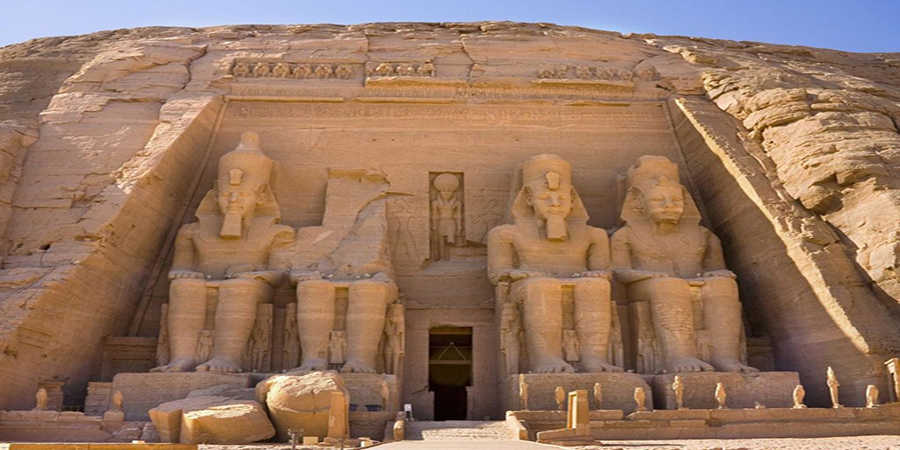 In the heart of the Nubian territory, almost on the borders of the Sudan is the most beautiful & imposing construction of the

Not only are the tow temples at Abu Simbel among the most beautiful monuments in the world but their removal reconstruction was an historic events in itself.

The temples are located about 280 km. south of Aswan. When they threatened by submersion in Lake Nasser, due to the construction of the High Dam, the Egyptian Government secured the support of UNESCO & launched a world-wide appeal.

The plan of rescuing the temples was Egyptian project.

During the salvage operation, which began in 1964 & continued until 1968, the two temples were dismantled & raised over 60m.up the sand stone cliffs where they had been built more than 3000 years ago.

Here they were reassembled in the same relationship to each other, & covered with an artificial mountain, the man-made dome.

Most of the joins in the stone have now been filled by the antiquity experts, but inside the temples it is still possible to see where the blocks were cut. It was a massive removal project & the photographs of the exhibition in the visitors center showing the different stages of that great work, about 50 countries contributed to the moving operations.

Abu simbel Temples are on the western side of the Nile. The temples faces the sunrise. Ramses II built them between 1300 & 1233 BC.

The design of Abu simbel is unique rock-cut “grotto” temples are frequently found in Nubia, but there is no other example of twin sanctuaries, in this case dedicated to Ramses II himself & to his wife Nefertari, which combine to form a single ensemble.

Unlike the other Nubian temples Abu Simbel was never transformed into a church but was left alone untouched by the later religions until it was recovered from the sand by the archeologists in 1813 (by Burkhardt), then in 1817 (by Belzoni), & later in 1842 (by Lipsius), 1869 (by Mariette) & 1910 (by Barasanti).

At the entry of the great temple are 4 huge statues representing Ramses II in a sitting Position. Each statue is more than 20 m. high.

The image of the main temple façade, with its 4 colossi & row of grinning baboons, is well-known all over the world but its immense power & majesty are impossible to depict visually.

Even today you can still feel the full might of the pharaoh in this edifice dedicated to male prowess & military power &, equally, the love of his wife & kids symbolized in the flowers & femininity of the smaller temple.

The rays of the sun till penetrate to the Holy of Holies deep in the rock of the main temple. Various scholars, 1st among whom Francois Champollion had noted that & what was then called the “miracle of the sun”.